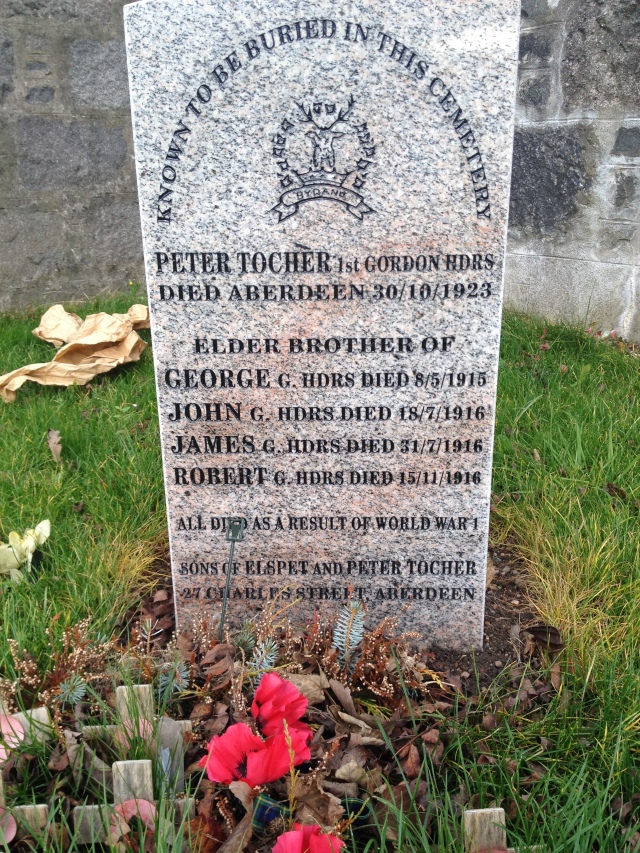 The First World War had a devastating impact on communities and families across Britain. This was especially true of George and Elspet Tocher who lived at 58 Hutcheon Street, Aberdeen. All five of the Tocher’s sons joined the Gordon Highlanders and went off to war.

By 1916 four of the boys were dead and the last survivor, Peter Jnr was languishing in a Prisoner of War camp after being captured in the first month of the war.

Corporal George Tocher was the first to fall; he died of wounds sustained during the battle of the Menin Road on May 8th 1915.

The battle of the Somme would claim the remaining three brothers. On July 18th Private John Tocher was killed. His body was never recovered. Less than two weeks later, James Tocher was also posted missing. He is commemorated on the Thiepval Memorial along with John and thousands of others with no known graves.

The final brother, Robert was killed in action on November 15th 1916.

Consumed with grief, Peter Tocher enlisted in the army and set off to France to with the intention of killing as many Germans as he could to avenge the deaths of his sons. The military authorities found out about the case however and prevented him from going to the frontlines. He served in a labour battalion until the end of the war.

The end of the war brought Peter Junior’s release from captivity. Unfortunately the harsh conditions in the camp had a devastating impact on his health. He was transferred to City Hospital where he died on October 30th 1923. The devastated family could not afford even a proper headstone so Peter was buried in a pauper’s grave in Trinity Cemetery. He was not given a military headstone as the war officially ended in 1921 so he was not counted as a casualty. In August 2014 a new headstone in the style of those found in Commonwealth War Graves was erected in the cemetery to commemorate Peter and his brothers.